Due to the drop of export volumes in 2014, Ukraine has short-received at least $ 12,5 billion

Due to the drop of export volumes in 2014, Ukraine has short-received at least $ 12,5 billion
6650
Administrator Administrator 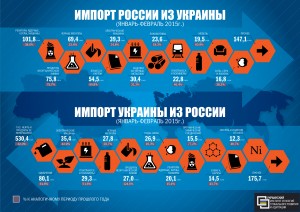 In 2014, due to a sharp drop in GDP volumes by more than 28,1% (from 182 billion to 131 billion US dollars) volume of export dropped sharply too – by 15% export of goods and by 25% - export of services. This means that in the past year, the country has short-received at least $ 12,5 billion. This is evidenced by the monitoring of foreign economic activity of Ukraine conducted by the Ukrainian Institute of strategies of global development and adaptation.

Expert of the Institute Igor Grozny said that one of the reasons of such collapse is, certainly, the war in Donbass. But the main cause of the drop of export was a prohibition of trade with the Russian Federation, as well as refusal to cooperate of a number of enterprises.

He also emphasizes that Ukraine has tried to compensate for losses from reducing exports to Russia by means of increasing exports to the EU and other countries. But amid general crisis developments in the global economy, this work has not brought expected results.

"If one analyzes the volumes of Ukrainian exports in January-February 2015, products worth about 2,1 billion US dollars were shipped to EU states. For the same period, Ukraine used to export goods worth $ 0,6 billion only to Russia", - says expert.

According to monitoring data, China, Turkey, Egypt and Poland are traditionally the main consumers of Ukrainian products after Russia. With the fall of export volumes to Russia, they have increased import of Ukrainian goods, but overall volumes remained without significant changes. 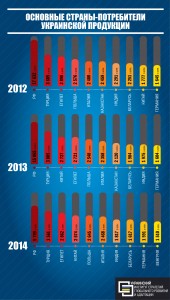 "So far, Ukraine does not have an alternative to strategic partnership with Russia. And if Ukraine expects to reorient its export flows, it is necessary to begin with restructuring of industry and economy "- summarizes Igor Grozny.