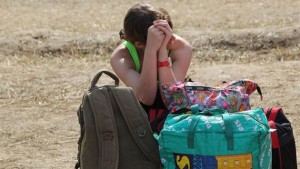 Absence of a systematic approach to the issue of IDPs from Donbass in Ukraine in the nearest future may lead to additional burden on the budget and to a dramatic increase of unemployment rate all over the country. This is evidenced by the analysis of the state policy in the sphere of work with temporarily displaced persons in 2014, conducted by the Ukrainian Institute of strategies of global development and adaptation.

According to statistics, the number of internally displaced persons in Ukraine exceeds 1,2 million people, out of whom 323 thousand have applied for financial assistance. In addition, only 6 thousand IDPs have been officially employed, another 40 thousand are trying to find a job, but so far unsuccessfully.

According to experts of the Institute, the state is gradually losing control over the problems of displaced persons, leaving unattended adaptation, social protection and many other important issues. Concealment and accumulation of problems in this area will inevitably lead to growth of the problem to all-Ukrainian level. One of the reasons for this – is the absence of a unified state program for work with IDPs: all activities are being conducted within the framework of agency-level regulations.

Expert of the Institute Vladimir Gurzhi believes that such approach leads to inefficient spending of budget and donor funds, increased expenditures and causes rather negative than positive effect among citizens.

He noted that the state is now focused primarily on provision of humanitarian and financial assistance to the IDPs. However, Ukraine should gradually move to development and increase of self-sufficiency of those who have left Donbass.

"It is necessary to adopt a unified state program for internally displaced persons, in which it should be provided for participation of volunteer and donor organizations. Such approach will allow to combine efforts and to obtain tangible positive effect", - says Vladimir Gurzhi.

The expert is convinced that the two priority issues that should be addressed by the program are the issues of housing and employment of IDPs.

"There are examples around the world, when due to sensible state approach the problems of employment and housing were solved simultaneously. In-migrants from an area of a conflict or a natural disaster were constructing their own accommodation within the framework of special programs. That is, this was both provision of jobs and simultaneous solution to the housing issue. Why wouldn’t we offer IDPs to settle a place to live by themselves? To build new housing and to repair old one. By the way, afterwards, one may allow IDPs to privatize such housing for a symbolic money at the legislative level"- suggests expert.