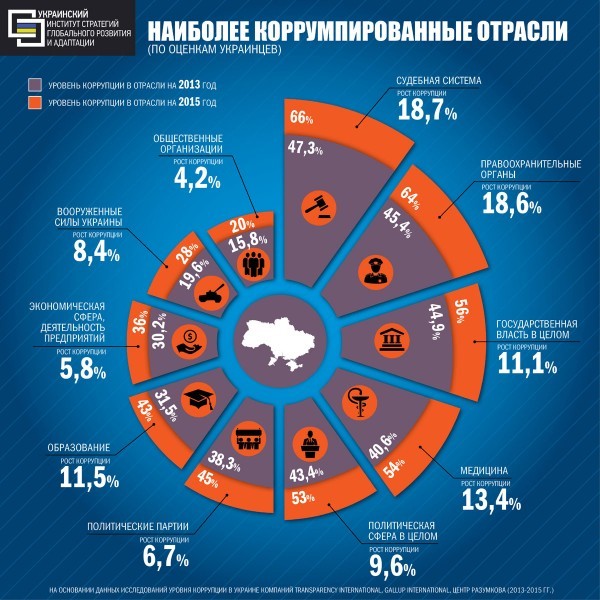 Despite the change of political elite and the rise to power of new people, corruption in Ukraine has not decreased, and in some areas even increased by 5-18%. This is evidenced by a comparative analysis of researches of levels of corruption in Ukraine, which were conducted by Transparency International, Gallup International and Razumkov Centre in 2013-2015. The comparative analysis was carried out by experts of the Ukrainian Institute of strategies of global development and adaptation.

According to the expert of the Institute Igor Grozny, corruption penetrates all spheres of life, and, despite the rise to power of new people, its scale increases.

"Almost every Ukrainian faced corruption in everyday life - at the polyclinic, in school, at university. Moreover in the consciousness of a Ukrainian a "gift-offering" is being perceived as normal and mandatory procedure. However, major portion of corruption in Ukraine does not perform function of "grease and acceleration", as it does in countries with low corruption pressure, but it performs functions of unjustified complication and artificial creation of obstacles ", - says Igor Grozny.

"In principle, in order to fight and defeat corruption in Ukraine it is necessary to apply the sequence of actions that proved to be effective in other countries consisting of 5-7 first priority steps. Which, by the way, are documented in the coalition agreement. However, the real work in this direction, unfortunately so far is not being done: ultimately it all comes down to PR", - says Igor Grozny.

Also expert of the Ukrainian Institute of strategies of global development and adaptation emphasizes that corruptness of Ukrainian society is huge. And in order to prevent irreversible processes in the economy, the government should make the fight against corruption its priority.