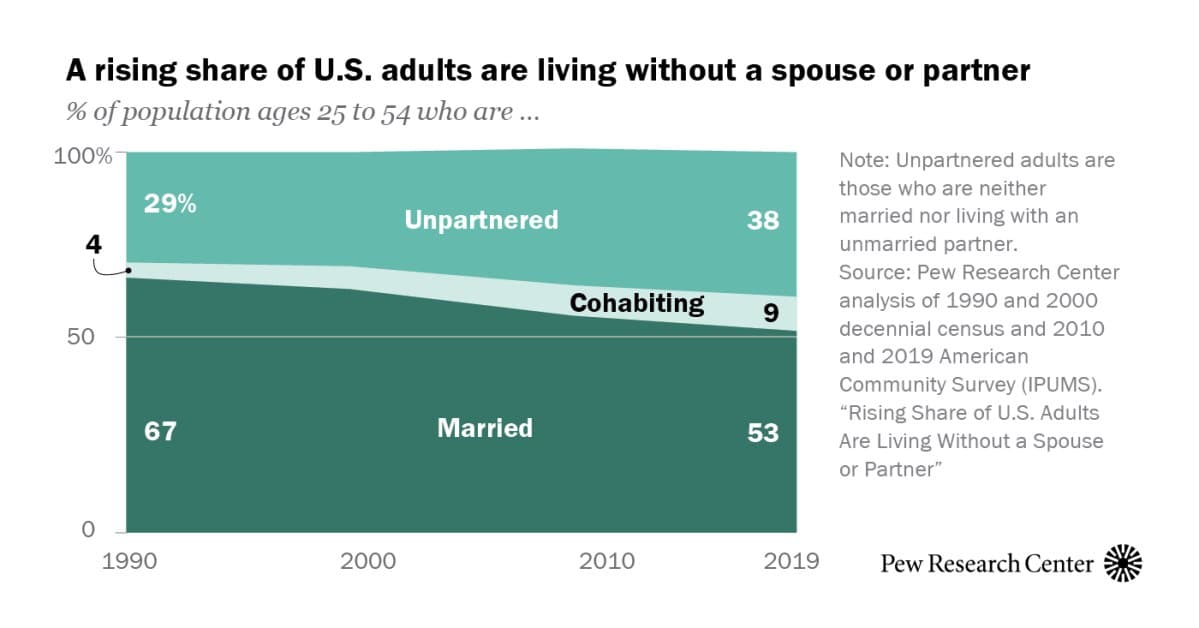 By Richard Frye and Kim Parker

Recently, according to research by the Pew Center, among American adults, the proportion of those who are not living with a romantic partner has been growing. A new analysis of census data from the Pew Research Center shows that in 2019, approximately four in ten adults aged 25 to 54 (38%) did not have a romantic partner, that is, were not married or lived with a partner. This share has risen sharply since 1990, when it was no more than 29%. Now men are more likely than women to be deprived of partnerships, which was not the case 30 years ago.
The growth of the single population is mainly due to the decline in the number of marriages among adults of the most working age. At the same time, the share of cohabitants increased, but this was not enough to compensate for the drop in the number of marriages - hence the general decline in partnerships. While the increase in people without a partner is also driven by the increase in the number of previously married adults (those who are separated, divorced, or widowed), the bulk of the growth since 1990 is due to those who have never been married.
This trend has widespread social implications, as does a growing gap in adult well-being with and without a partner. As measured by a range of indicators of economic and social status, adults who are not in partnerships tend to have different — often worse — outcomes than those who are married or in cohabitation. This pattern is evident among both men and women. Adults without a partner have, on average, lower earnings than adults with a partner, and are less likely to be employed or economically independent. They also have a lower level of education and are more likely to live with their parents. Other studies show that married and cohabiting adults do better than unmarried adults on some health indicators.