Main » Events » Events » THE DIRECTOR OF THE UKRAINIAN INSTITUTE OF GLOBAL STRATEGIES: THERE IS NO OTHER WAY OUT OF THIS CONFLICT BUT DIPLOMATIC

THE DIRECTOR OF THE UKRAINIAN INSTITUTE OF GLOBAL STRATEGIES: THERE IS NO OTHER WAY OUT OF THIS CONFLICT BUT DIPLOMATIC

THE DIRECTOR OF THE UKRAINIAN INSTITUTE OF GLOBAL STRATEGIES: THERE IS NO OTHER WAY OUT OF THIS CONFLICT BUT DIPLOMATIC
3975
Administrator Administrator 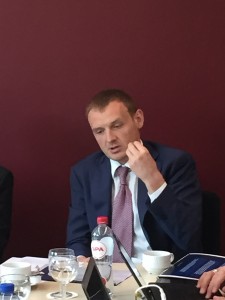 — In what direction Ukraine should look for possible ways out of the crisis?

Victor Levitskiy: There couldn’t be another way out of this conflict but diplomatic, only through diplomatic consultations and negotiations there could be found a solution for this situation. There could be no other results by force but victims. And I believe we need to think about how to better integrate Donbass into Ukraine, not to disintegrate it. That should be the central issue.

— Initially, the conflict was triggered by the signing of the Association agreement between Ukraine and the European Union. Do you think Europe has changed its position on it?

Victor Levitskiy: I think that people who have been promoting all this situation didn’t aspect such an outcome, which we are witnessing today. They could not have foreseen this conflict and the situation in general.

— Initially, it started as a struggle between Russia and the European Union for Ukraine. Europe offered an association agreement, Russia offered a discount on gas and a loan. When and where, at what stage the US began actively interfere?

Victor Levitskiy: I think this is only one of many prospectives one could see this situation, for instance from the competition between the geopolitical players. It is very important to say that when it happened, it did also because of the will of the Ukrainian people. It was the will of the Ukrainian people who had resorted to the procedures of direct democracy to express their position.

But due to the fact that the US is a member of the UN Security Council and on the basis of the statements of many former and current executives, to some extent, the United States feel responsible for the world as a whole, they could not remain on the sidelines. As soon as the situation went beyond the Ukrainian borders, that, on my opinion, was the moment when they began playing active role.

— The situation in the east of the country is unstable. There is no such an open conflict as it was during the summer and autumn of last year and at the beginning of this year. But taking the situation as a whole, for how long Ukraine could exist without some kind of effective economic development programme?

Victor Levitskiy: I do not know how much in economic terms … We are already seeing serious issues and serious problems. But here at this stage it is important for Ukraine to have a political leader which every day have to have a strategy and implement it.

— Ukraine is geographically located between the two major economic blocs the Eurasian Economic Union and the European Union. From the standpoint of national interests of Ukraine, how should it build its relationships with them?

Victor Levitskiy: I’m going to say now things that are quite unpopular in my country. I believe that we can not ignore either of the parties. As soon as we start to ignore one of the sides, our neighbours, I mean, sooner or later it will lead to very bad economic consequences for the country. And sooner rather than later. Today, this idea is not popular in my country. But in today’s world, if you’re not with someone “big” or if you are yourself  not “big”, you are getting harder and harder to survive because globalisation requires integration. However, I think that if we focus only on one union, that won’t be good neither.

— With regard to the non-aligned status of Ukraine, you think that it can and should be maintained? Should Ukraine follow a policy of neutrality?

Victor Levitskiy: Today’s conflict showed it. Any attempts to draw Ukraine into one or another military-political bloc – should it be NATO or CSTO, there will have be an opposition from the other side and to paying for this will be eventually the Ukrainian citizens.

— It is clear that Ukraine have to undergo reforms. Still, the contradiction between the east and the west of the country exists. Or do you think this is too far-fetched? Should we speak about the most promising government system for Ukraine – since gaining the independence, Ukraine has several times changed the political structure of the country, there were different types of constitution, now there are rumours about decentralisation and federalisation, in the end, what could ensure sustainable development of the country on your opinion?

Victor Levitskiy: I will answer you this way, our country is very multi cultural. But this is one country, and today every Ukrainian thinks that he or she is Ukrainian. And the opposition that has been on the Dnieper, and in other regions, is rather invented for political needs of people who made it up. These cultural differences that we have in our country are necessary not to oppose, but to use for greater consolidation and wealth of our nation. With regard to what governmental structure should be, I think the key point here is not in this, but rather there should be involved maximum number of people to participate in the democratic process through civil society and non-governmental associations. A maximum number of votes of ordinary Ukrainian citizens should be heard.

That’s the key point. It is the public which holds the concept of a democratic state that is perfectly embodied in many Western European countries.

— Do you think Ukraine could come back to the same political system and territorial integrity as back in 2013?

Victor Levitskiy: You know, it is not even a point what Ukraine was in the past. Since then, it took one and a half year, and during this eighteen months, the country has seen so many events that sometimes even in 50 years won’t happen. So, I do not think we should put this question this way. The world is going on, Ukraine is developing, together with this global process, under the influence of the global development of the world civilisation. Therefore, Ukraine is, what it is now, and let’s think on how to make it better tomorrow.

03.03. The revision of the IMF program for Ukraine may be postponed to the 3rd (July-September or 4th (October-December) quarter of 2021, the forecast of analysts at Bank of America Global Research.
www.epravda.com.ua
03.03. The European Union is launching a new program to support the economic development of Donbass. The launch of the program is expected this year.
news.rbc.ua
03.03. Speaking at a meeting organized by the UK and Canada on the use of coal in the energy sector, the UN chief expressed hope that the G7 members will announce plans to phase out coal in the power industry at their June summit.
news.un.org
Show all