Main » News and comments » 2015 » The results of the video conference on the topic “Context and prospects of settlement of the conflict in the east of Ukraine” (11.06.2015, Kyiv-Brussel-Moscow)

The dialogue between representatives of the intellectual communities of the parties involved into the Eastern Ukrainian conflict may contribute to its resolution. That is the conclusion that was reached at the videoconference Brussel - Kyiv - Moscow, arranged by the Ukrainian Institute of strategies of global development and adaptation. Scientists from Ukraine, Russia, Europe and Israel, European and Ukrainian politicians, public figures, experts in resolution of regional conflicts participated in the dialogue.

In his welcoming remarks, Director of the Institute, Mr. Victor Levitskii, said that the purpose of the teleconference – was to create a communication platform for a dialogue between experts and society of the three subjects of international policy: EU, Russia and Ukraine.

"Our conference - is the first step towards harmonization and stabilization of public consciousness. Enunciation of problematics of the conflict in Donbas within the expert community is necessary to develop a consensus on key issues and to remove emotional tension in public consciousness", - said Mr. Victor Levitskii.

Director of the Kyiv branch of the Institute, Doctor of Philosophy Aleksandr Belokobylsky stressed that already now, in the course of finding solution to the conflict, it is necessary to take into account the fact of further coexistence of Ukraine, Russia and Europe.

This thesis was developed by a representative of the Higher School of Economics (Moscow), Doctor of Political Sciences Maksim Bratersky, who emphasized: "We do not know how the events will unfold, but it is obvious that all of us will have to live together for dozens and hundreds years".

Director of the Institute of Philosophy of National Academy of Sciences of Ukraine, academician Miroslav Vladimirovich Popovich drew attention of the participants to the need for consensus regarding initial provisions of the dialogue, which should include democratic values and human rights.

In his turn, representative of the Brussels studio, former Israel Minister of Justice, politician and social activist Yossi Beilin, comparing Israeli and Ukrainian conflicts, said that it is possible to find a solution to the conflict only at the negotiating table.

Director of the Ukrainian Institute of strategies of global development and adaptation, Mr. Victor Levitskii in his concluding remarks called on all participants of the teleconference to promote abandonment of affective evaluations and political prejudice.

He invited every person interested in peaceful settlement of the conflict to participate in the initiative "Ukrainian consensus", launched by the Institute. It is an open memorandum that captures results of expert discussions regarding finding a way out of Ukrainian crisis.

"Through this mechanism with the help of the expert community it is quite possible to create a foretype of a road map of conflict resolution and stabilization of situation in Ukraine. It is necessary to find basic things that unite us rather than divide", - said Mr. Victor Levitskii. 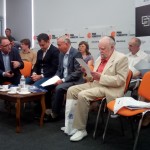 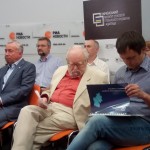 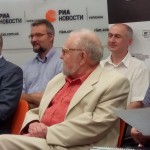 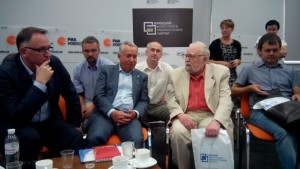