Religion in the Global World 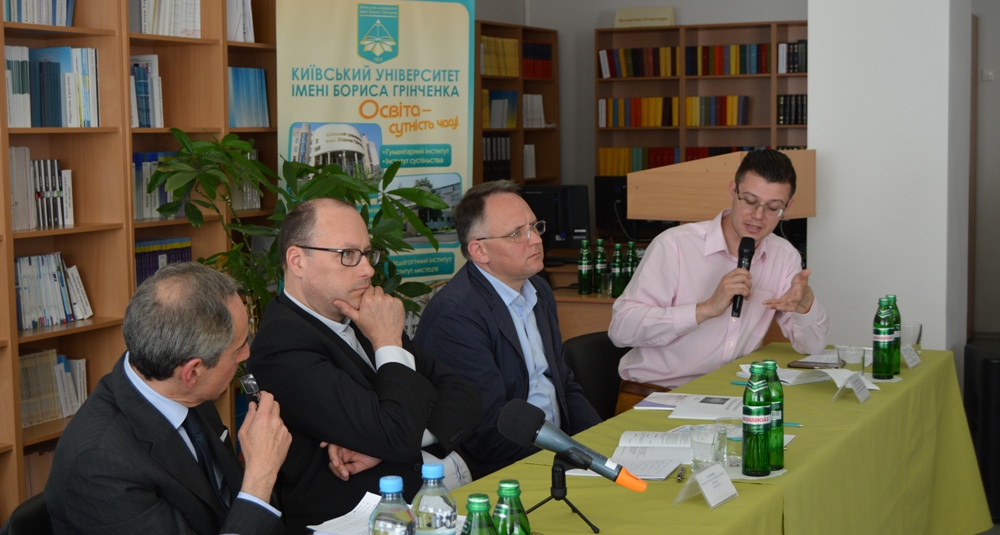 The role of religious factors in the modern world politics and economy is very important and widely discussed by Western intellectuals, though not always acknowledged by politicians and general public in the former Soviet Union. The scientific and educational seminar “Religion in the Global World”, held in Borys Grinchenko Kyiv University on June 3, 2016, was dedicated to traditions, trends and challenges of the presence of religion in the social life of the global community. The representatives of the academic, diplomatic, and ecclesiastical communities, in particular of the Pontifical Urbaniana University in Rome, Sofia University in Florence, the Institute for Religious Sciences in Trieste, H.S. Skovoroda Institute of Philosophy of the NAS of Ukraine, the Ukrainian Institute of Strategies of Global Development and Adaptation took part in this seminar.

The intense religious revival was emphasized in the report of the Prof. Roberto Catalano who considers the numerous examples of conversion to the new religious trends and movements as Christian (conversion to Pentecostalism and the movement of Jehovah’s Witnesses in the former Soviet and Latin American countries) and Islamic (the emergence of such movements as the “Islamic State” and others) and of other origin as the symptoms of such revival. At the same time, there is a migration of the religious traditions from the regions of their classical advancement, for example, the number of Muslims in Europe is constantly growing, whereas the Islamic factor was negligible here for centuries. On the other hand, Christianity has migrated from Europe to Africa, Asia and Latin America.

The questions of significance of religious activity in the modern world were also touched upon in the report by the Prof. Oleksandr Bilokobylskyi, who focused on the occurrence of several global projects in the modern world, aimed at creating supra-national religious-motivated communities, which are more or less opposed to the West. These projects should be considered as quasi-religious entities, as they do not reject Western ways of argumentation and actions (forms of production and exchange, infrastructure, many household items, etc.). They desecularize the Modern, but simultaneously secularize the “parental” religious traditions on a wide scale basis, thereby reducing their cultural potential. It is no exaggeration to say that the quasi-religious alternatives of the Modern grow “on the spilled blood” of not only the Modern itself, but also of classical religiosity. Supranational communities, formed in the process of their implementation, become important players in the world politics.

The reports of the participants were focused on both positive and negative impacts of globalization on the development of a religious life. At the end of the event, there was a discussion about the UISGDA presentation “Religious mobilization in the post-secular world.” In particular, answering to a question whether it is possible to talk about Huntington clash of civilizations in the time when there is no unity of Western civilization and its values have received the status of universal human ones to a certain extent, Oleksandr Bilokobylskyi stressed that today it is necessary to talk about a new type of civilizational clashes, a diffuse one, when the confrontation takes place at each point of geographic space via the mobile Internet and social networks. As for the unity of the West, it is based on the values, which become apparent during the hardship, as it is in the Donbas now. One of the participants also noted that the media and virtual communication play the leading mobilization role in the creation of such danger, and the European partners were surprised to learn that the European Euronews channel was prohibited in Ukraine, which set a course for Europe.