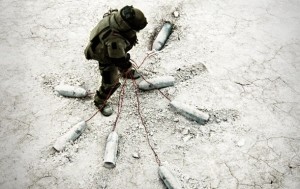 After the war, in Donbass Ukraine will face the necessity of global mine clearance in the territories of armed hostilities. Moreover, this process may be dragged for decades, and will be complicated by the fact that most of the minefields were placed illiterately and without mapping minefields. This is evidenced by the analysis of the Ukrainian Institute of strategies of global development and adaptation.

According to the expert of the Institute Vladimir Gurzhy, there are only three options for demining of areas of armed hostilities in Donbass: "The first option is that Ukraine, together with peacekeeping contingent, should already now request international support and invite demining experts. The second option – is to enter into direct contracts for demining with private military companies. The third option - is to prepare to carry out demining on its own".

Vladimir Gurzhy emphasizes that the most profitable for Ukraine is to carry out demining with the help of our own specialists: "In fact, involvement of international donors - is a long and bureaucratized process that may take more than a year. And concluding direct contracts with demining companies – is expensive. For example, Croatia in the period from 1998 to 2005 has spent about 240 million Euros for these purposes".

In its turn, Ukrainian demining center in Kamenets-Podolskii has been created and operates since 2001. Its specialists have perfectly approved themselves during the peacekeeping mission in Lebanon and during the war in Iraq. "For three years of Ukrainians’ involvement as a part of the UN mission in Lebanon, Ukrainian military identified and neutralized more than three thousand explosive objects. During the war in Iraq, Ukrainian EOD specialists have disposed of more than 60 thousand units of ammunition within 6 months", - says expert.

However, Vladimir Gurzhy emphasizes that whatever model of demining Ukraine chooses, it will be ineffective with