Main » Events » Events » Presentation of the book "Watersheds of secularization": religious awakening as a challenge to a modern world

Presentation of the book "Watersheds of secularization": religious awakening as a challenge to a modern world

Presentation of the book "Watersheds of secularization": religious awakening as a challenge to a modern world
5950
Administrator Administrator 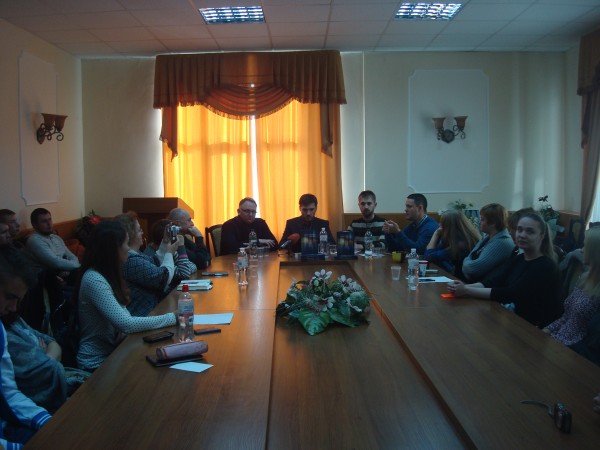 Presentation of the scientific monograph "Watersheds of secularization", which took place on the 15th of October at the National Pedagogical Dragomanov University, gave reasons for an undisguised talk concerning the newest historical events.

Authors of the book, experts of the UISGDA,pointed at the necessity of solving three priority issues Ukrainian intellectuals are facing.

First one concerns the fact that even serious discussions in our society make a start from the information given by mass media, and so in general have ideological or propaganda tinge. That's why Ukrainians are removed from all-European discourse and have distorted view on events in their own country and in the world. Second issue comes from the first: closedness of informational space doesn't let Ukraine become a full-fledged participant of international competition and dooms to a long outsidership. And at last the third issue concerns science itself: engagement, politicization of debates, neglect of truth devalue scientific researches and destroy Ukrainian science.

From A.Belokobiskyi point of view, with a help of these issues a fact,that ideas of the book "Watersheds of secularization"-about competition of secular and religiously motivated projects of global development and value ideological clashes- caused deep interest among specialists,including specialists from Europe and America, whereas in Ukrainian mass media they are followed by political attacks and accusations,can be explained.

Scientific reviewer of the monograph,famous Ukrainian theologian M.Cherenkov, pointed out in his speech that secularity was maybe not always optional, but a rod for a public order, whereas the new order of things in not yet defined and now his manifestations are mainly aggressive. However, there can be an other face in post-secularity:"for the present we can see a destructive process. But I hope,that our time can also activate a peacekeeping beginning in religion and we will be witnesses and participants of a competition between different kinds of post-secularity"- the philosopher notes.