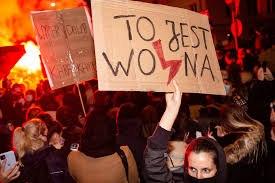 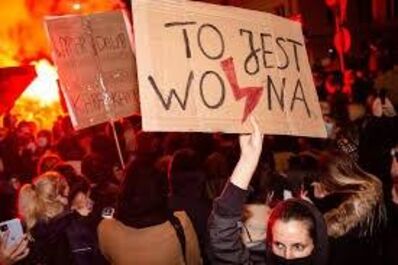 For the fifth day in Poland, protests against the tightening of the abortion legislation have not abated. According to the organizers, the protests covered about 150 cities. In Warsaw, protesters blocked several busy intersections. Agencies report that many protesters stripped off their outerwear and held posters with insultingly written demands for the government to resign. In Krakow, the protests were held under the slogan "This is war." Tens of thousands of people took part in the protests across the country. In particular, they blocked traffic on the roads.
The decision of the Polish authorities to take such a controversial step in the midst of a pandemic, when society is electrified by economic and psychological problems, raises many questions. Today, Poland is experiencing the second wave of the coronavirus epidemic; for several days in a row, the country has been recording records for mortality and the number of infected. Since Saturday, October 24, all of Poland has been in the "red zone", which means that it is forbidden to hold mass actions with the participation of more than 5 people throughout the country.
Activists are calling on Poles to take part in blocking roads throughout Poland; from Wednesday, the women intend to go on strike. The protests are acquiring more and more distinct anti-government and anti-church orientation.