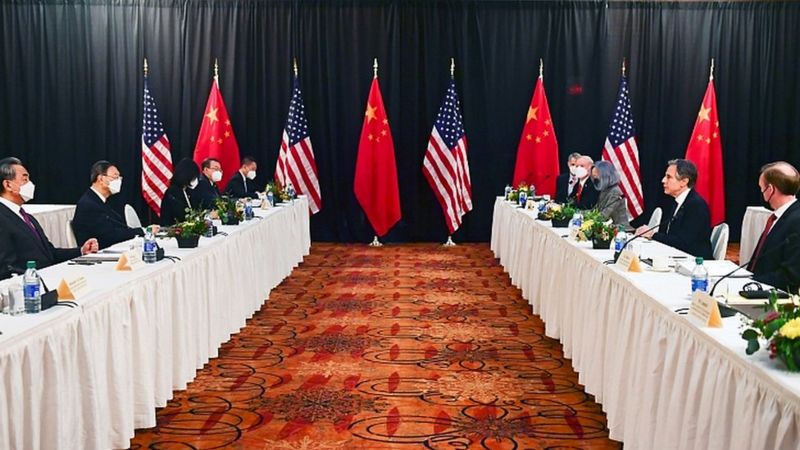 The meeting in Anchorage, which began in a raised voice, is attended by Secretary of State Anthony Blinken and National Security Adviser Jake Sullivan from the American side, and Foreign Minister Wang Yi and one of the most senior officials of the Foreign Ministry, Yang Jiechi, from the Chinese side.
In anticipation of the talks, Blinken said that the United States intends to express deep concern over China's actions, including the situation in Xinjiang, Hong Kong, attitudes towards Taiwan and cyberattacks against the United States.
In response, Yang Jiechi objected quite sharply: "The United States has no right to speak with China in a condescending tone, the Chinese people will not accept this," stressing that relations with China should be based on mutual respect, and history will prove that those who try strangle China will ultimately suffer from these attempts. Further, the Chinese official accused Washington of using its military power and financial superiority to suppress other countries. "You are abusing the postulates of national security by obstructing normal trade relations and inciting some other countries to attack China," the official added. At the same time, according to Yang Jiechi, the human rights situation in America itself is far from the best.
This skirmish, which took place in front of the world's media representatives, lasted more than an hour and preceded the negotiations themselves, which included three rounds. It was the first meeting at such a high level since June last year and the first for the Biden administration.
After the speech of the Chinese representative, Sullivan began to explain to reporters that the United States did not seek a conflict with China, but would uphold its principles and defend its allies. Following the conclusion of the opening speech, a spokesman for the Biden administration said China had violated the agreed protocol, which required two-minute speeches by both sides, while the spokesman's speech took much longer. “It looks like the Chinese delegation has arrived with the intention of showing itself to the public, focusing on theatricality and drama,” the US official said. He added that these kind of dramatized presentations are "aimed at an internal audience."