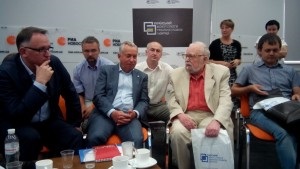 The teleconference was held between academics and experts of three cities: Kiev, Brussels, and Moscow (Russian Federation). The purpose of the teleconference was declared as being to establish stronger links between the institutions of the civil societies of Ukraine, Russia and Europe. The conference participants presented their interpretations of the conflict, which were intended to go beyond the well-established ways of understanding the conflict which, participants agreed, have previously been formed on the basis of official statements and the rhetoric of the mass media.

The organizers were hopeful that the discussion around the presentation, as well as the discussion of the necessary steps towards a normalization of the situation in Ukraine and Europe would mark the beginning of a long-term dialogue between representatives of the intellectual communities of Ukraine, Europe and Russia. In short, the intended purpose was to reach a consensus at an expert level, which could become a template for broader political compromise.

And the debate was lively – opening proceedings, Ukrainian Institute of Strategies of Global Development and Adaptation Director Victor Levytsky said that “constructing a dialogue in the best traditions of goodwill” was the conference’s most important aim – and he added that “the mood of the Ukraine’s population is very important and must be acknowledged”.

“I believe that this conference will make progress towards stabilizing the emotions of Ukrainian society,” Levytsky added.

Alexander Bilokobylskyi agreed, adding: “ Concerning the conflict in East Ukraine, we must seek out similar goals and objectives. “We are confronted by very particular circumstances – the new frontiers in this situation have been artificially created.”

Andrii Suzdaltsev in Moscow said: “Religion exists as a political marker in this conflict,” and Yossi Beilin added: “We can definitely take a lesson from the conflict in Israel – quite frankly, the world has had enough of both sides’ arguments, and wants simply that a solution be found. There can be no doubt that in Ukraine, as in Israel, both sides still feel threatened by the other, and until a way is found to remove this feeling of threat, either above board or behind closed doors, no progress will be made.”