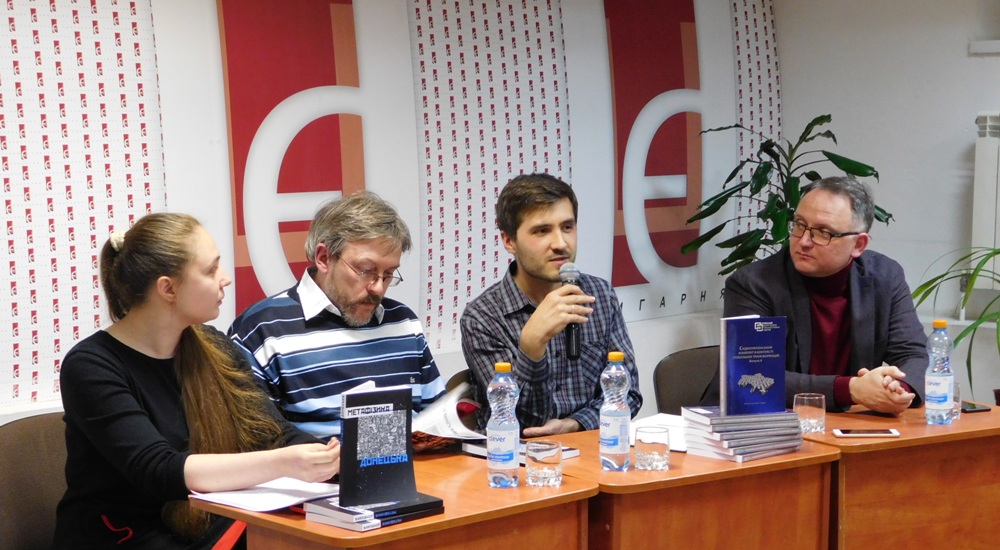 On the 11th of November at the Ye bookstore there was a discussion on the topic “Donbass, Ukraine, Europe – between history and memory” on the occasion of the presentation of UISGDA’s publications “The metaphysics of Donetsk” and “East Ukrainian conflict in the context of global transformations” (Issue II). The event was dedicated to differences between historical narratives and cultural memory.

At the beginning of the meeting, the academic secretary of the UISGDA Khalikov Ruslan emphasized the necessity of axiological part of our semantic universum, including perceptions of historical heritage – biography of a person, region, nation, which form the identity. Values are the property of communities, which cements their unity.

Director of Kiev branch of the UISGDA Bilokobylskyi Olexandr made an assumption that such events like Brexit and Donald Trump elected president of the United States witness if not the erosion of Western values, but their transformation. After that, R.Khalikov has focused attention on the example of Donbass in the context of the issue of European values and differences of values in 2014.

Professor of Borys Grinchenko Kyiv University Yaroslav Pasko talked about complexities of the rise of Ukrainian identity. In particular, he pointed at a certain artificiality of this process in Ukraine, comparing to Poland, since all classic stages of a nation building were substituted with ersatz projects, which have been given “from above”. Such simulacrum was a cultural process in Soviet and post-Soviet Donbass, where humanitarian problems were at the margin.

Postgraduate student of the Department of Philosophy of Vasyl' Stus Donetsk National University (Vinnitsa) Ksenia Hurzhy made an overview of the history of Donetsk as of an industrial city, which got its modern look during times of the USSR. Important locations are monuments and constructions, which represent the cultural heritage but which must “de-communized”. An attempt to put city’s cultural space in line with the official historical narrative will result in a conflict of subjective perception of history (memory) and constructed reality.

O. Bilokobylskyi developed his idea of the transformation of values in the world and drew attention to the problems of Europe as a symbol and Ukraine’s development goals. Europe was born and exists in the sphere of senses, so an adherence to European values, that is an observance of human rights and their dignity, tolerance, is a real entry into Europe.