Main » About us » Personalities » Dodonov Roman 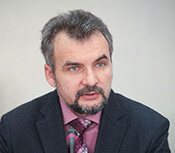 In 1995 he defended his thesis in the Zaporozhe State University on the topic “Humanization of ethnic relations as factor of development of freedom”.

In 1999 he defended his doctoral thesis at the Institute of Philosophy named after G.S. Skovoroda of the National Academy of Sciences of Ukraine on “Social-philosophical analysis of the process of formation and functioning of ethnic mentality”.

Since 2014 he heads the Department of Philosophy of the Donetsk National University (Vinnitsa).

Author of more than 250 publications of scientific, educational and methodological nature.

07.05. The International Monetary Fund (IMF) remains in talks with Ukraine and expects more progress to provide the second tranche of the stand-by program.
www.dw.com
07.05. The birth rate in the United States fell by 4 percent last year, according to a new government report. This is the largest annual decline in 42 years.
ukrainian.voanews.com
07.05. Ukraine has asked the United States to expand the training mission for the Armed Forces of Ukraine.
interfax.com.ua
07.05. In Porto, where for the first time together all the leaders of the EU and its member states will meet (albeit virtually) prime minister Narendra Modi on Saturday (8 May), there is an opportunity to add a new impetus to the relationships between Europe and India.
euobserver.com
Show all