Main » About us » Personalities » Bilokobylskyi Olexandr 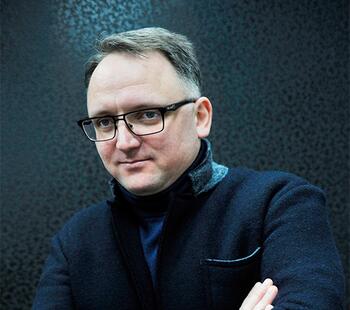 In 2003 he defended his thesis in philosophy in the Institute of Philosophy named after G.S. Skovoroda of the NAS of Ukraine by scientific specialty 09.00.09 – “philosophy of science” on the topic “Place and importance of a myth, as an element of ontology of science.”.

In 2008 he defended his doctoral thesis in the Institute of Philosophy named after G.S. Skovoroda of the NAS of Ukraine on the topic “Fundamental principles and strategies of rationality of Modernism”.

Since 2007 – he is deputy chief editor of professional magazine “Science. Religion. Society”. Head of the Center of Practical Philosophy and Cognitive Studies.

Author of more than 100 scientific publications.

Ethical Significance of Philosophy in the Era of Global Conflicts

Macron-Erdogan case: can religious freedom and a secular state coexist

POETRY AS AN ORGAN OF BEING

The architecture of European totalitarianism: to see, to understand, not to repeat

Philosophy is again trendy. When it's necessary

The world after the pandemic: transformations that cannot be undone

Why Ukrainian ideology is necessary

The picture of the world as a part of social reality

A Pun on the Minsk Subject

14.05. The Israel Defense Forces (IDF) announced on its Twitter page that it was attacking the Gaza Strip by air and ground forces. Earlier, additional military units were drawn to the border. However, this is not a land operation directly in the Gaza Strip.
www.dw.com
14.05. The European Union calls on Ukraine to speed up ratification of the Istanbul Convention on the Prevention of Violence against Women and Domestic Violence.
www.ukrinform.ua
14.05. The 2011-2020 decade was the hottest on record. Against the backdrop of industrialization, the average air temperature in 2020 was 1.2 degrees Celsius higher than in 1850-1900.
www.aa.com.tr
Show all